How they do love math!

It was Saturday School today....for FOUR HOURS!! 8am-noon.  Who wants to get up and do math for four hours on a Saturday?  52 of my students did and they were enthusiastic about it!  We had so many desks, tables and chairs, I'm confident that the fire marshall would have declared us to be in violation of code, but that didn't matter to the kids (or me)!  There was SO MUCH math discussion going on.  It was like being a comic book enthusiast at Comic Con!  Surprisingly, I couldn't even tell you how much noise there was because I don't notice it so much anymore.  Funniest part of the day was having a student tell me, "I called you and you ignored me." It was funny because I thought it was a solicitor so I silenced the call.  Her group was trying to get my attention from across the room.

The most interesting part is how little I actually had to do.  I circulated the room, as much as I could with 45 desks, 3 large tables and 9 spare chairs, but mostly students were up at the whiteboards working and explaining to each other.  Sometimes there was a disagreement about a solution and I would get called over.  Occasionally I got to use a "teachable moment" about some topic (I still love getting to explain!). Once in awhile, groups wanted to know if their solutions were correct and I loaned answer keys here and there.  It is awesome when the students can check their answers and choose to re-work (if they get it wrong) the problem rather than call me over immediately.  What I have been experiencing lately is: "if you leave them to work together long enough, they almost always get to the correct solution".  As students have been working in class, I have noticed that sometimes a group will send a "scout" to get my attention when I am working with another group, and then by the time I get to that group that had a question, they say "nevermind, we figured it out".  I love that!  Moreover, if one student in a group asks a question, my first response is "did you ask anyone else in your group?".  If the answer is no, I simply say "they don't bite" and walk away.  Still working to teach them that I am not the "keeper of the knowledge" and how to use their immediate resources.  Many times I explain to one student or one group and then make them "pay it forward" by explaining to another.  If they can do it, I know they have it figured out.  That explaining is SO IMPORTANT!! 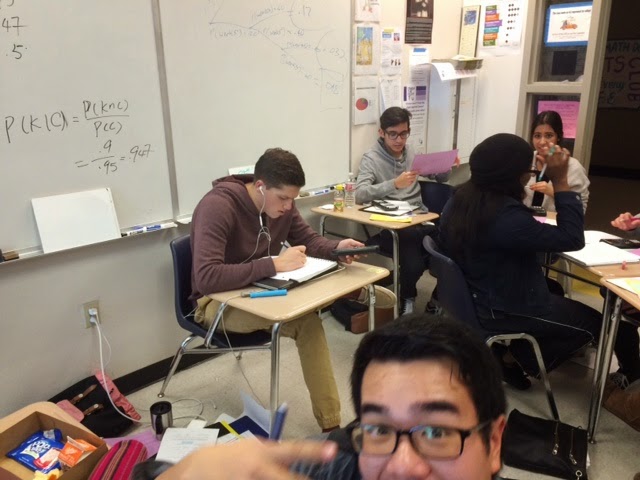 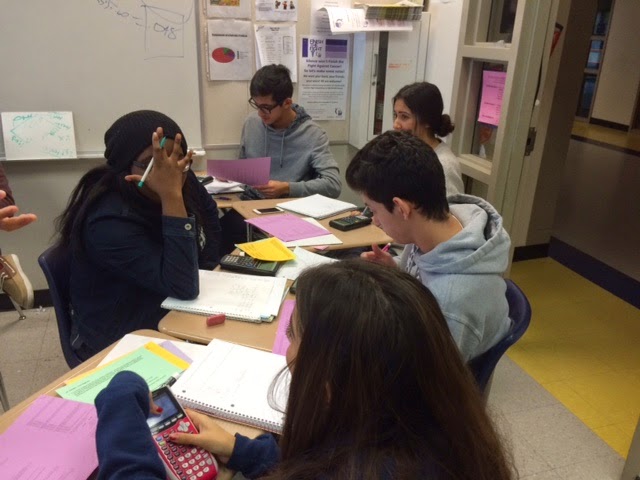 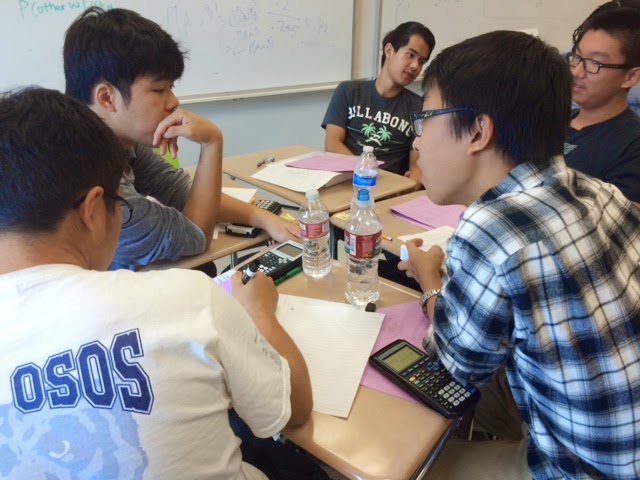 It was interesting how the groups formed.  Because they are used to working with a new team every two weeks, it didn't seem to matter who they worked with.  While I would have expected them to sit with friends, they just sat anywhere and started working with whoever was at their table.  Some of them moved desks to form larger groups.  All I had to do at 8 am was announce their options for what they could work on, and post it up on a section of the board.  After that, they made their own choices about how to best prepare for upcoming tests, or the final, or learning the current contents we are covering in each class.  Mind you half of the room was Calculus and the other half was Statistics, so it was impossible for me to be teaching.  But the students rely on me less to do that as they really have realized that I give them instruction when they need it (at the beginning of new topics) and then I give them the tools they need to figure it out so that it is internalized.  They don't need to listen to me much.  I really am a coach, and I love that.  I push them farther, make them think deeper, apply what they know and explain it to me and to each other.  This year really has been the most amazing year of all my 30 years combined!!

Looking forward to every day that I go in!!  Even on Saturdays!
Posted by Unknown at 9:14 PM

"If I have seen further, it is by standing on the shoulders of giants." Sir Isaac Newton

If you wish to email me: